In this update you have a new weapon that you can find in crates or buy from the merchant. The Boomerang:

Be careful when it’s coming back. If you don’t catch it in time, it can hit you. 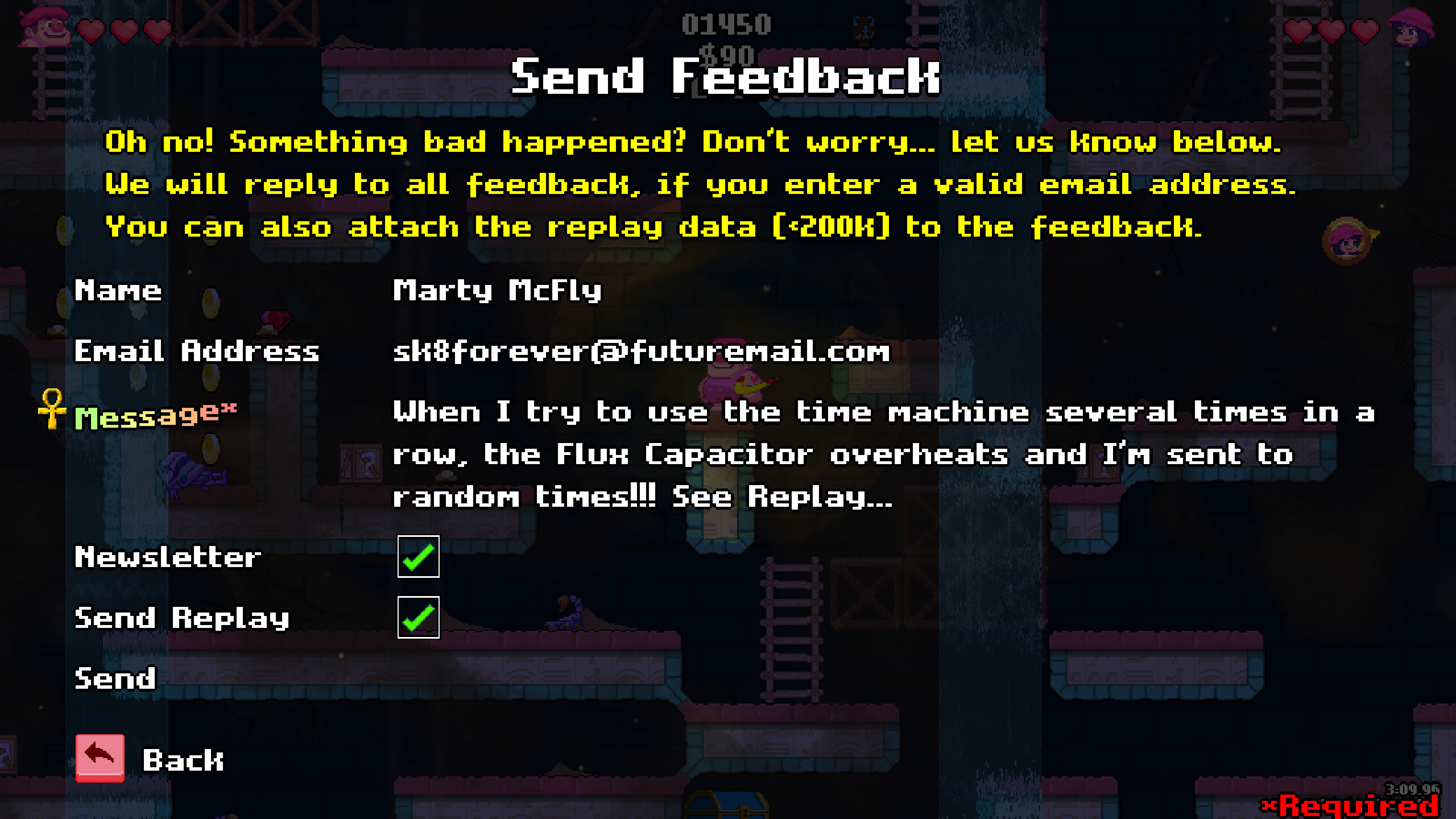 Also now you can send feedback from within the game. While in a level, just press F8 and you can enter your feedback. The last 30seconds of replay data will be sent (typically less than 200k). Your feedback and replay will be sent to Pyramid Plunge’s server, which will then notify me via email. I can then check out your replay to better understand your feedback. If you provide a correct email address I will be able to reply to you.

This update changes a bit how you process your death :).

You now get to choose which path to take down the pyramid. And like in the old arcade games you have 3 credits (chances) to use when you die. You can choose another path. Or go back to the same level to take your sweet revenge, and also collect your dropped loot and items!

Bonus video of my kids giving me a beating in my own game!

I’m super excited to release this build. Also as from this build I will be adding some videos showing the major features in the release. 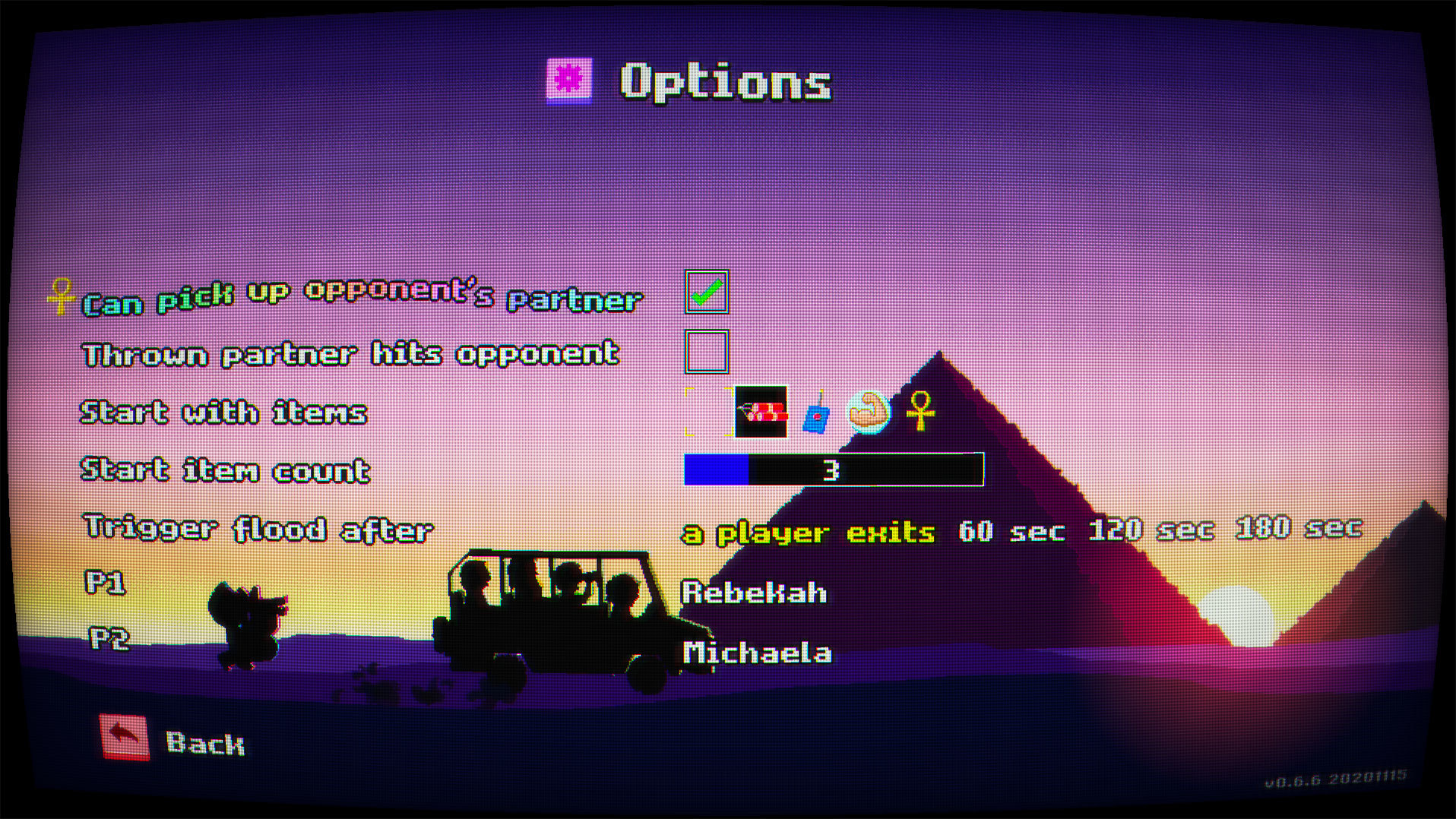 I’ve been very busy to get the demo out and finally it’s released. I was quite astonished when preparing the release notes how much items were in the list. Download the free demo from the Steam.

Thanks for all the bugs reported by the community on the Discord server.

And I also did this animation 🙂

Here’s the full Release Notes for v0.6.2 (which includes the demo build)

I finally added the new graphics for enemies in the Egypt world. I also updated some other Egypt world graphics like the mural and doorway. It’s coming together nicely. The Mayan enemies will be next :).

Here are the full release notes for this update v0.6.1:

I’ve been working on the sprites for the last 3 weeks or so, using the concepts from Samuel Suarez. Apparently I had to redo over 400 sprites! WOW. But it was worth it. The new characters are more lovable. Hope you like them too.

Pyramid of the Day was tweaked as well. The time bonus was giving too much points. Also I added a 1000 bonus points if you get any of the following perfect:

I have added support for the following languages:

The above were translated by translators (actual persons) but not professionals from the games industry, so I’m expecting there will be a lot of inconsistencies. And Localization QA is quite expensive.

If any of the above languages is your native language, I would really appreciate it if you could double check it and report and weird translations 🙂

Join the community on Discord to give suggestions and get daily updates on art and development.

So this week Pyramid Plunge has been listed on alphabetagamer (https://www.alphabetagamer.com/pyramid-plunge-beta-sign-up/) and that has caused quite a big surge on Discord.  There’s over 60 users now on the channel which is awesome!

As soon as I saw those players coming in, I decided to pause on everything, and add something to Discord to make hopefully make it more interesting to the players.

The game already had leaderboards for each difficulty of the single player (Tourists = Beginner, Returning Visitor = Medium, Badass = Hard). There’s also the leaderboard for Pyramid of the Day (which resets every 24 hours). And I thought … “wouldn’t it be cool if the player got some kind of recognition in Discord when they top the leaderboards?”. So that is what I focused on this week.

I created a bot (which I called Giorgio 🙂 ), and through it you can query the current leaderboard status directly from Discord. Moreover, the bot will check if those in the top 10 should be given a title. So they would be shown under Tourists, Returning Visitor or Badass according to the difficulty they played in.

In the case of Pyramid of the Day, only the first one will be recognized and highlighted in Discord as Pharaoh of the Day, and a crown will also be placed near his username. Of course this only lasts for one day 🙂

There are instructions in this new build how to link  your discord in order for your scores to be recognized by the discord bot.

Also this week I had the pleasure to record a multiplayer session with Judo Cruise Gaming. We used Parsec for this. Enjoy!https://www.youtube.com/embed/LassmCCs98s